Ian was “blown away” by the care he received while participating in the RELIEF study, describing his EMERGE nurses as his “sunshine girls”. He said taking part in research was the best decision he had made.

Read on for more from Ian.

“It was my first time taking part in Research as I was taken out to the RIE by paramedics when they came at 2am. It seemed to have taken ¾ of an hour to arrive to hospital as I had broken ribs so I was in agony with the ambulance seeming to find every pot hole.”

“Once at the RIE, I was in A&E and eventually put in the Major Trauma ward where Nicky visited me quite often and would always brighten my day.”

“While in the A&E though, It felt like I was on my own half to three-quarters of my time there and with lots of activity going on it felt ages. During one of these times on my own, Fiona (McCurrach) and Nicky (Freeman) approached me and it made such a difference. I have dubbed them “my sunshine girls” as they were happy company, very attendant and came to visit often. Taking part in their research project with their care made all the difference in my stay at the RIE.” 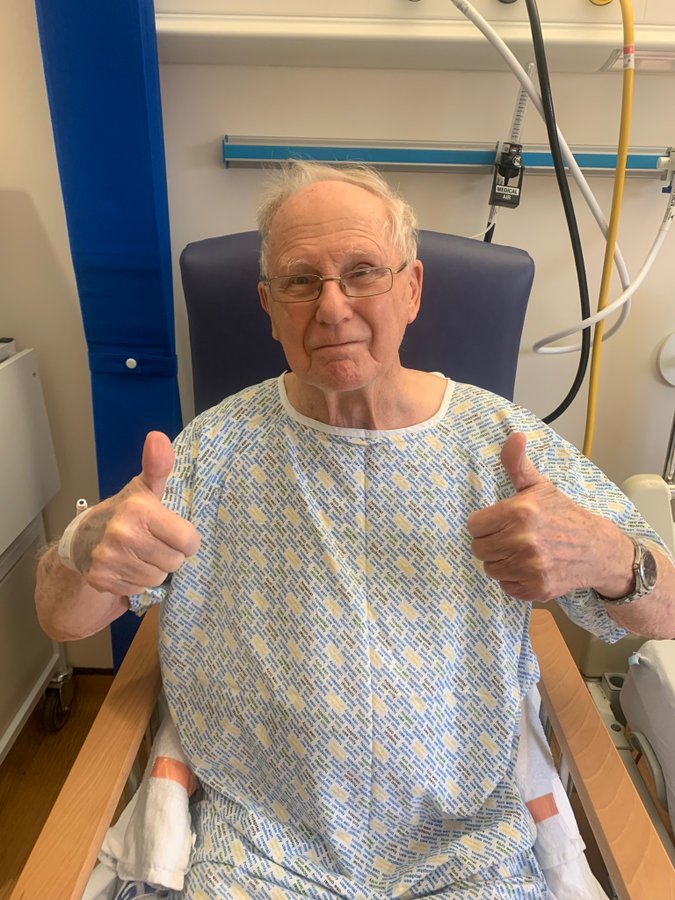 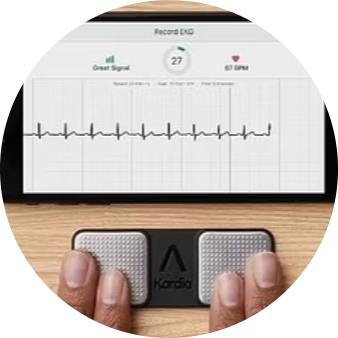 The IPED study recruited between July 2016 and January 2018 and investigated whether a smartphone-based event recorder (AliveCor) could increase the number of ED palpitation and pre-syncope patients in whom an ECG was captured during symptoms over the next 90 days. The smartphone-based event recorder resulted infive fold more patients (55%) recording a diagnostic rhythm compared to the control arm. Publication of the study results is in progress, meanwhile one of our participants, Mrs PM, kindly agreed to share her IPED journey with us.

Mrs PM had been suffering from episodes of palpitation lasting up to 15 minutes before her visit to the emergency department in May 2017. Before arriving, she was feeling fine whilst walking down the street to meet her friend when she suddenly developed palpitation and dizziness. Once seated in a cafe, she started to feel worse with nausea and became worried that she might fall off of her chair. The waitress at the cafe called an ambulance for Mrs PM and during her journey to the hospital, she started to feel better. On arrival in the emergency department she felt that she had no symptoms and was back to    normal, which was confirmed with a normal ECG. Mrs PM was approached by an EMERGE research nurse who discussed the IPED study and she ‘had no question of not taking part’. Mrs PM was later discharged with the AliveCor device set up on her phone by the EMERGE research nurse and even managed to drive her son home later that day.

Following on from this attendance, Mrs PM continued to have episodes of palpitation. These events were in various locations such as at home and whilst walking her dog. However, Mrs PM was scared to go out of the house and to the shops as she became more aware of the lack of seating outside of her home, if she did start to feel unwell again.

When Mrs PM first used the AliveCor device to record an ECG during an episode of palpitation, she felt relieved that the symptoms had been recorded and felt it was easy to use the device and phone application. The ECG recording she submitted, which showed an AV node re-entrant tachycardia, prompted a call from the EMERGE team, asking her to visit her GP. Mrs PM’s GP referred her to the cardiology clinic where she had a successful ablation procedure. Following this procedure, her episodes of palpitation decreased and she is now asymptomatic. Mrs PM stated that the IPED study had ‘changed my life’. Her support and participation along with the other 242 participants who also took part in IPED around the UK has been valuable improving care to those with palpitation and pre-syncope disorders.

The study showed that using an ambulatory ECG monitor in ED patients with unexplained syncope resulted in the identification of a symptomatic significant arrhythmia in 1 in 10 patients and a diagnosis in 3 in 4 patients.

Allan took the viewers through the technology and how to place iRhythm’s Ziopatch onto the patient’s chest before Rob took the reporter through the day of his ED attendance and the frightening episode of syncope that caused him to spill a cup of hot tea over himself. Rob’s full story is powerful and emotive and demonstrates the massive impact that timely diagnosis and treatment can have on a patient’s quality of life.

Matt then explained how this type of technology has the potential to change the current management of syncope patients by reducing hospital admissions, changing first-line monitoring from low diagnostic yield Holter to higher yield patches and allowing earlier diagnosis and treatment of clinically important arrhythmias.

The report, which featured on the evening broadcast of BBC Reporting Scotland this has been captured for posterity.